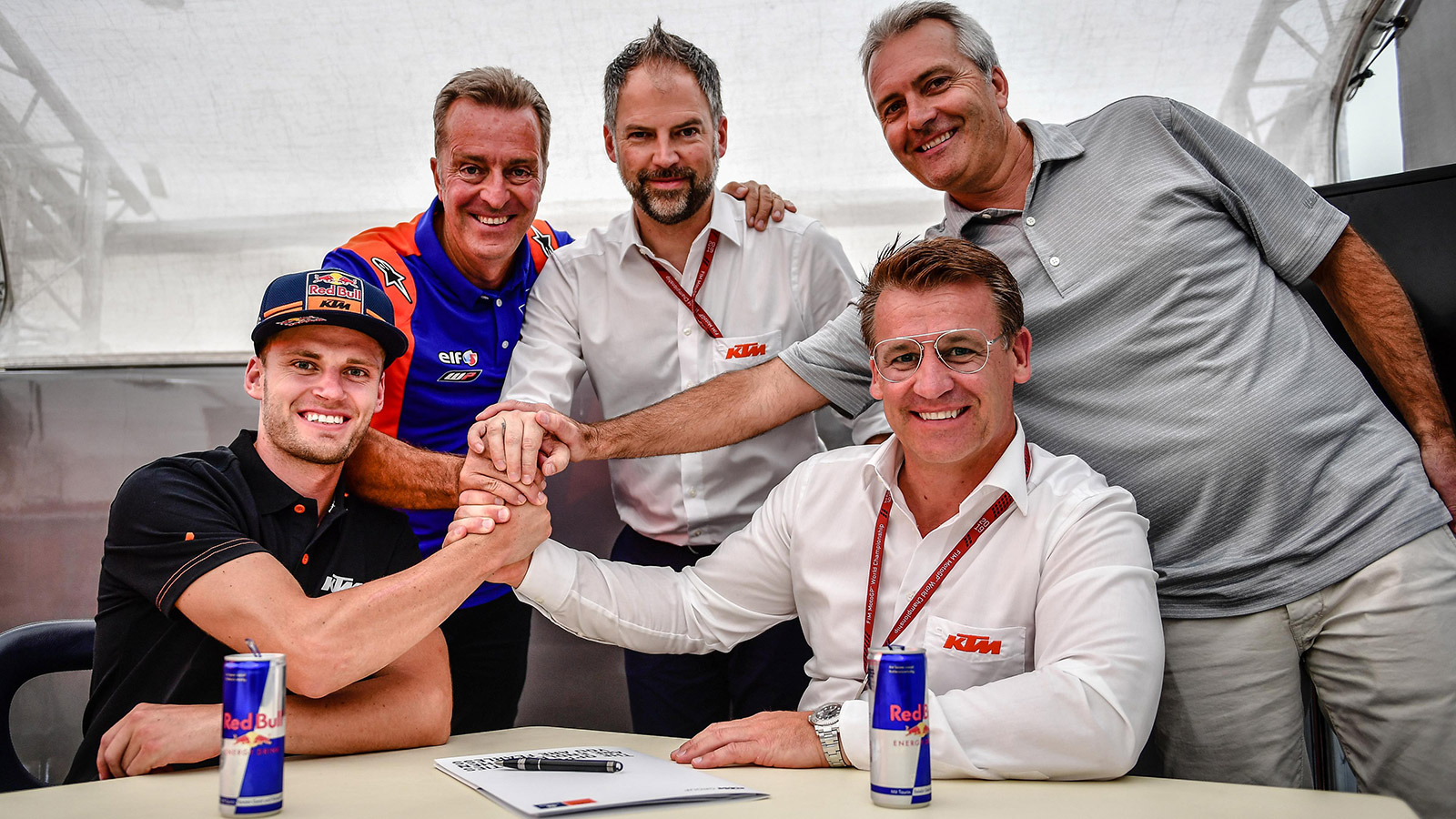 KTM will welcome their next MotoGP racer to have come through the Red Bull MotoGP Rookies Cup and Red Bull KTM Moto3 and Moto2 ranks when Brad Binder joins former teammate Miguel Oliveira at Red Bull KTM Tech3 next season. Binder should become the first South African to enter the leaderboard in the premier class since the year 2000.

The 23 year old 2016 Moto3 World Champion will steer the KTM RC16 next year after three seasons, 3 victories and 8 podiums – to-date – in the Moto2 category. Brad made his Grand Prix debut in 2011 (as a Red Bull MotoGP Rookies Cup race winner) and grabbed his first silverware in 2014. He claimed the 2016 world title in just his second term with Red Bull KTM Ajo (becoming South Africa’s first world champion in thirty-six years and just the third from his country) and graduated immediately to Moto2 with the same team. He raced alongside Oliveira in 2017 and 2018.

In MotoGP Brad will be the first South African to take to the grid in the four-stroke era and to score significant points since Kork Ballington, Jon Ekerold and Brett Hudson in the early 1980s.

Brad will join Red Bull KTM Tech3 for what will be the team’s second season in ‘orange’ and the early stages of a young project for both the squad and the brand.

Brad Binder:
“It is incredible to have this opportunity. I want to say a huge ‘thank you’ to KTM, Red Bull KTM Tech3, my manager and my family for helping me get to the premier class and to be able to give it a try. It is an amazing feeling right now and a dream come true. When you are growing up then this is what you aim for – to be in the MotoGP class with the best riders in the world with the best bikes – so it is a crazy feeling right now.”

Pit Beirer, KTM Motorsport Director:
“To be able to sign Brad Binder for our MotoGP project is an exciting moment because he has been with us for five years already and is one of our world champions. We have a strong story and connection and we’re really happy that it continues. It is clear we all have a big challenge in front of us and we also feel responsible for him to be able to maintain this good path we have together. We also like the fact that Brad has this distinctive riding style that allows him to push a bike and project to the maximum. We feel that he ‘fits’ to us, and we cannot wait to see how he handles and attacks a MotoGP bike. I’m sure he can add some extra and special things because he has done that with every motorcycle he has raced so far and it will be a highlight not only for us but for all MotoGP fans.”

Hervé Poncharal, Red Bull KTM Tech3 Team Manager:
“We are only halfway through our first racing season in MotoGP with KTM, but already we have some incredible, exciting news coming with the signing of Brad Binder for the 2020 MotoGP season. Brad is somebody I have been following since he joined the championship in the Red Bull MotoGP Rookies Cup and later in the Moto3. I have always been amazed by his talent, his aggressivity and his never-give-up-attitude and when you run a motorcycle race team, this is the profile of rider you wish and you love to have. I think to have the Miguel Oliveira – Brad Binder line-up reunited with us next year, is something that shows the Red Bull KTM organization and path is working. I think Brad Binder more than deserves a MotoGP ride next year after what he has been showing in the Moto2 the past two seasons. I know KTM and I can witness KTM is working incredibly hard to improve the MotoGP bike and I’m quite sure that Brad with the winter test will be very happy and very fast from round one on that bike. It’s going to be a strong team, as I think there will be a great relation between him and Miguel, his teammate and I honestly believe, I couldn’t dream for a better structure. Miguel and Brad know each other, they are both incredible competitors and when you are a team owner, this is all you wish for. So, together with Red Bull, KTM and Tech3 there was never any doubt that this is the line-up we wanted to have and I would like to thank Pit Beirer for his investment, I would like to thank Niki Ruhstorfer for his support. I would also like to thank Bob Moore, Brad’s personal manager, because I think the four of us, we managed to make that happen and this is a great news for MotoGP racing and a great news for the Red Bull KTM Tech3 team. I would like to say a huge warm welcome to Brad and tell him we are going to follow him even closer during the second part of the Moto2 season. I’m sure he’s going to win some races, why not fight for the title and we are ready to welcome him from the Valencia test.”