Points finish for Brad in Qatar in 2021 season opener 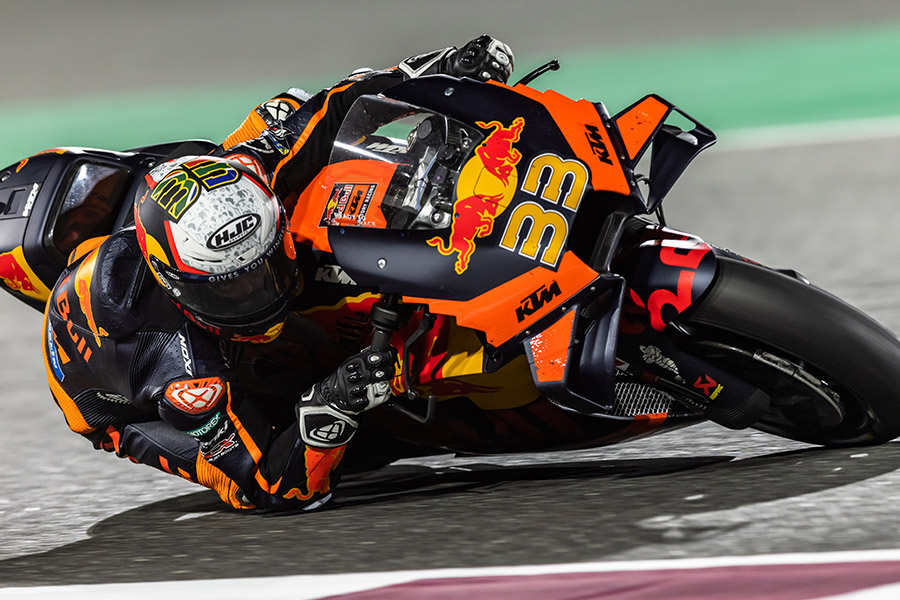 Hours of work and hundreds of testing laps around the Qatari facility finally counted for something on Sunday evening as the Barwa Grand Prix of Qatar brought the 2021 MotoGP season to life. The Red Bull KTM Factory Racing and Tech3 KTM Factory Racing teams had already spent five days of set-up work in early March and two further days of practice and qualification getting prepared for the first of two back-to-back races in the Middle East.

MotoGP has visited the modern but flat and featureless Losail layout for eighteen years, the last 15 as the opening site of a championship campaign. Due to the beginning of the pandemic, the MotoGP class missed the 2020 edition of the event but made up for lost time with plenty of miles around the quick and relentless course.

Brad Binder, Miguel Oliveira, Iker Lecuona and new KTM recruit Danilo Petrucci all strived to try and use the strengths of the KTM RC16 in Qatar and struggled for searing one-lap speed to make an impression in qualification. All four riders could not emerge from the Q1 cut on Saturday night and line-up in the second half of the grid with Oliveira furthest ahead in 15th.

Compared to Friday and Saturday the Qatari evening air was cooler and windier, the gusts causing problems for bike stability and corner judgement. Both Oliveira and Binder made strong starts and circulated in – or on – the fringes of the top ten until they were each plagued by front tire grip problems and had to trim their pace.
MotoGP will not move anywhere this week. The pitlane garages will remain full for the Tissot Grand Prix of Doha on Saturday/Sunday 3-4.

Brad Binder:
“It’s good to have the first race of the season under our belts but we didn’t finish close to where we wanted. For sure the whole team and I expected much more. We have to accept reality and there is work to be done at this circuit. In the first part of the race I thought we could be competitive but at half race distance I completely finished my front tire. It was a case of either bring the bike home safely at the pace I was doing or lose the front. It was difficult but now we have data from the first race and we can move on from here.”