Brad positive on testing progress and looking forward to more 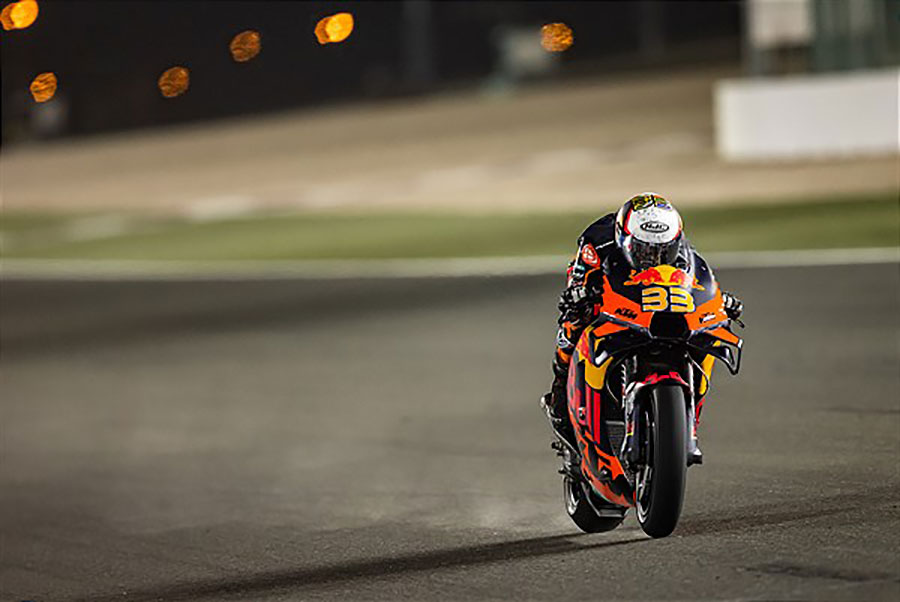 Five days, two tests, 35-hours of track time and hundreds of laps of the Losail International Circuit: both Red Bull KTM Factory Racing and Tech3 KTM Factory Racing rounded-off their only pre-season outing prior to the first two rounds of the 2021 MotoGP series, due to take place at the same race track in Qatar on March 28th and April 4th.

The Losail International Circuit has held a unique place on the MotoGP calendar since its inauguration in 2004. For 2021 the floodlit venue, a short distance outside the city of Doha, hosted the sole warm-up for the upcoming season through five days of testing where both KTM teams worked on their race set-ups and options for the KTM RC16 ahead of the opening Grand Prix at the end of the month and the homologation deadline.

After three wins and nine podium results in only their fourth season of MotoGP in 2020, KTM have lost their concessions for the campaign. They therefore focused on sustaining their potent engine performance while working on mileage, electronics and further refinement of the motor that has been frozen for development in 2021 in accordance with the championship rules. In addition to the 2021 bikes KTM also freighted a wealth of new components to Qatar for the four racers as well as test rider Dani Pedrosa to evaluate. They included variations on their aerodynamics and upgrades to the WP Suspension systems.

Red Bull KTM Factory Racing duo Miguel Oliveira and Brad Binder notched plenty of circulations of the fast, windy layout and in varying temperatures as afternoon sunshine turned to dusk, evening and humidity throughout the test. Sadly, the last day was hit by strong gusts and a lot of sand on the asphalt which prevented most of the grid from further work and scrubbed the chance for time attacks in earnest. In the final combined standings Oliveira placed 16th while Brad, who did manage a few minutes on track, ended the visit in 17th.

Brad Binder:
“It was quite a tricky test for us. It started well but then I had a couple of small crashes and that interfered with our plan quite a bit. By the fourth day I was feeling a lot more comfortable again and riding bike like I want. It would have been nice to have had one more day but we’ll come back here in a week or so with a couple of things still to try and, from which, I’m sure we’ll up-our-game once more.”